It’s easy to see why aerial photography by the likes of Yann Arthus-Bertrand has become so popular. It’s probably the driving force behind the current rise in popularity of camera drones. There is something quite compelling about seeing “the earth from the air”. It’s a perspective we seldom see, and can be breathtaking.

However, remotely controlling a drone from terra-firma cannot possibly compare  with actually being up there like the girl in the “nimble” ads… (ask someone who remembers the 1970s). 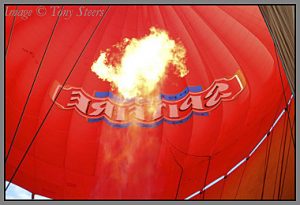 So, July 2012 and I’m in a big wicker basket suspended beneath a big red balloon. It was a warm, slightly hazy and remarkably still morning at Etchinghill. In fact, so little wind was there that, after drifting lazily this way and that trying to find some direction from breezes at varying altitudes, we eventually came back to earth on the same golf course from which we had taken off some 90 minutes earlier.

From over a mile up there is so much to see. This particular day happened to be the final day of that year’s Tour-de-France, and from our lofty vantage point we could see the long lines of traffic waiting to board the eurotunnel trains and head off to witness Bradley Wiggins triumphantly lead the peloton  through the streets of Paris.

On a hilltop overlooking Folkestone, a military radar station had been temporarily sited. Part of a network monitoring the skies for the duration of the London 2012 Olympic games. 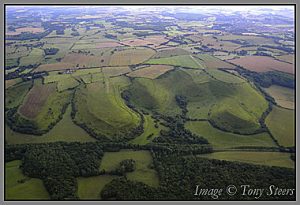 In every direction the views were breathtaking. Stretching from the coast of France, north to Essex and westwards to Beachy Head. Our knowledgeable and skillful pilot, Michael, gave a full commentary, pointing out interesting features such as the infamous Goodwin Sands and the Royal Military Canal. It was like a combined history and geography lesson from the air

The chill morning air and the silence, both broken only occasionally by the heat and roar of the burners to maintain altitude. What a memorable experience, and one that I’d happily repeat, and heartily recommend.