There are some places whose names become inextricably linked in our memory to events (usually disasters) that happened there:

All appalling disasters which resulted in tragic loss of life. All are entrenched in our collective memory, even though we may not have a personal memory. The Aberfan tragedy, for example, happened exactly one year before I was born. There is no possible way I can have a “real” memory of it. Memories of my own childhood up to the age of around 5 or 6 are hazy at best yet Aberfan is etched on my mind, to the extent that on mention of the name, I “see” the old black and white news footage and photographs.

The others are more recent. Personal memories, mostly in full colour, informed still by news coverage, all are called to mind simply by the place name where the tragedy happened. We remember those who were lost even though we never knew them, we feel a chill down our spines, and we hope and trust that lessons have been learned and changes made to ensure we never see a recurrence and that someone will be there to ensure we and our family and friends remain safe. Which brings us neatly on to the 8 crewmen of the RNLB Solomon Browne who, on the 19th of December 1981, launched into unimaginable conditions to answer a distress call, and paid the ultimate price.

Penlee, to me, is unique among those listed above, in that the abiding memory is not visual, but aural. The radio messages between lifeboat, shore and stricken coaster, the sudden loss of radio communication and the desperate, repeated, unanswered calls from the coastguard on shore, “Penlee Lifeboat, Penlee Lifeboat, Falmouth Coastguard. Over…” in the context of the final outcome on that December night, are a reminder of the power of nature and the raw courage of the RNLI volunteers. Yes, volunteers… the RNLI receives no government funding, and the brave men and women who are willing to put the needs of “those in peril on the sea” above their own do so entirely voluntarily. Keep that fact in mind as you read the accounts and listen to the radio transmissions from the final launch of the Solomon Browne.

Jack Lowe has been a keen RNLI supporter since childhood. A self-confessed lifeboat obsessive, Jack knows exactly the type of person it takes to be a lifeboat crew member, because he’s been travelling the length and breadth of the country meeting and photographing them along with their stations and vessels.

The lifeboat station project is a huge task that will see Jack visit every one of the 238 RNLI stations in the UK and Republic of Ireland, making wet plate photographs on glass of the lifeboats and crews using vintage large format equipment and developing in a converted ambulance. This is a seriously tough gig, but the results published so far are truly beautiful works of art.

The aim of the project is to raise awareness and fundraising for the RNLI, and will culminate in an exhibition and book to further boost funding. I wish Jack every success in this endeavour and am keeping an eye on the mission map in the hope of saying hello when he visits my local station. 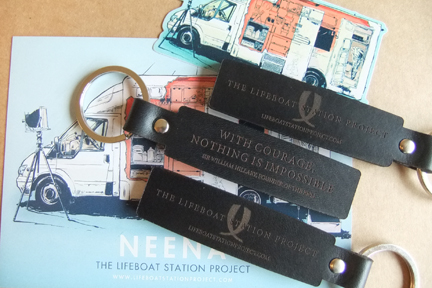 There’s a whole lot of interesting stuff on the lifeboat station project website, – www.lifeboatstationproject.com – including information and documentaries about Penlee, so do pay a visit and follow and maybe support the project and the RNLI.

2 Replies to “the lifeboat station project”